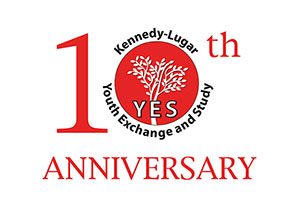 The Kickoff Party will be a day-long event starting at 12:00 AM (EST) on December 12 on Twitter and Facebook.  Anyone can join at any time during the event.

The Kennedy-Lugar Youth Exchange and Study (YES) Program is a program sponsored by the Department of State, Bureau of Educational and Cultural Affairs, that brings high school students from countries with significant Muslim populations to spend an academic year in the US. iEARN has been a partner since the program's first year, and is currently responsible for technology support for the program, and the recruitment of students from Arab-Israel, Bangladesh, Cameroon, Liberia, Mali, Pakistan, Senegal, Sierra Leone, and Suriname.